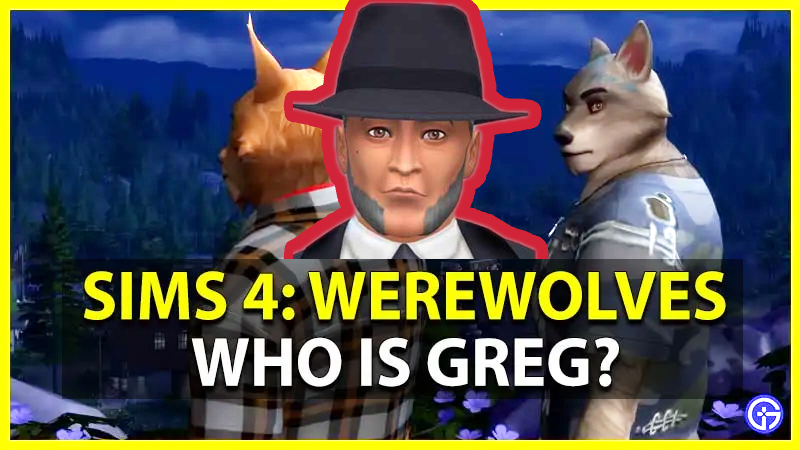 Greg (in full, Greggorius Lunvik) is a NPC werewolf introduced in The Sims 4: Werewolves. He can be found wandering around Moonwood Mill, where he appears to reside in one of the trailers that decorate the world. Sims can have unique interactions with him, such as attempting to distract him, cry his name, or attempt to communicate to him. After he agrees to talk to the sim, the interaction to become a werewolf from Greg appears.

As revealed in Lou Howell’s biography, Greg is the one responsible for turning him into a werewolf, as Lou tried to impress his date, Celene López, by taunting the town’s local feral werewolf. While Greg bit Celene as well, she chose to take an antidote and remain human. In the trailers, Greg is also shown to be responsible for turning Lux Demarco into a werewolf, though she does not appear in the world.

According to many books and artefacts that can be found in Moonwood Mill, Greg was likely a Mooncaster before becoming a werewolf. While he was still a Mooncaster, it is implied he had a familiar named Brutus. Despite his appearance as a middle-aged man while in his human form, Lily Zhu suspects Greg is actually closer in age to Vladislaus Straud, though she has no proof of this.

When viewing the description of Avelina’s Trusty Telescope, it is revealed that Greg was married to a woman named Avelina Lunvik before she passed. When viewing the description of a rug in Build/Buy Mode, it is revealed Greg’s mother was also a werewolf, a crafter named Pernilla Lunvik, who used the young Greg to test the durability of her handmade rugs.

According to Rory Oaklow, if Fury is an ocean, then Greg is drowning in it.

how to age up toddler sims 4